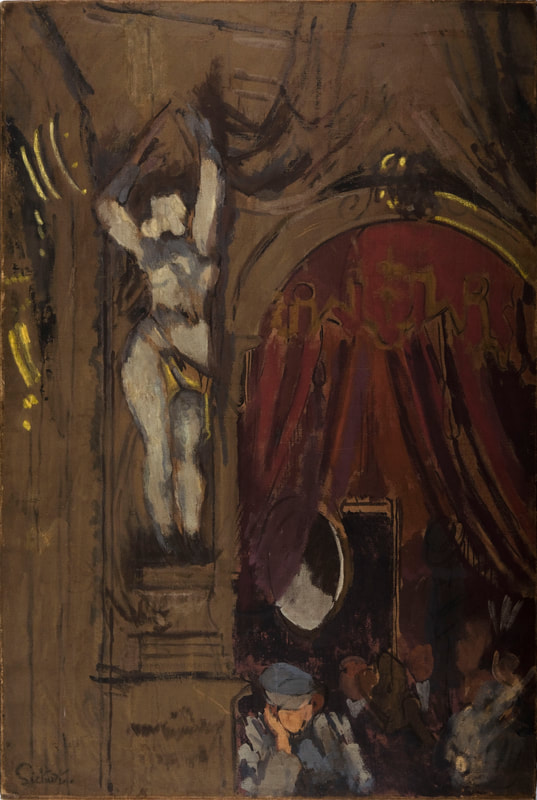 LITERATURE
Wendy Baron, Sickert Paintings and Drawings, New Haven & London 2006, no.470 reproduced in colour; Wendy Baron, Sickert, London 1973, under no.367; Wendy Baron, ‘Dating Sickert’s Paintings of the New Bedford, Camden Town’, The Burlington Magazine, no.146, May 2004 fig.55.
In 1914 Sickert’s friend Ethel Sands commissioned him to make a sequence of paintings to decorate the dining room of her recently built house in Chelsea. They were all to show the interior of the New Bedford Music Hall and were designed to create a kind of panorama of the theatre’s interior; the present picture was to hang to the left of the fireplace. The music hall was a key subject in Sickert’s art and he had moved from painting its stars in the 1880s and 1890s to depicting the audience and evocative gilt and plush of the theatres themselves. The New Bedford, so called after the original ‘Old’ Bedford burnt down, opened in 1899 and was located in Camden High Street. It was famed for its opulence, with large plaster caryatids, red velvet hangings and ornate gilded decoration.

Ethel Sands’s idea to commission Sickert to make his picture cycle was likely to have been inspired by her contact with Vuillard, who had carried out similar domestic decorative projects in France. Sickert’s original interest in the music hall also had French origins, and stemmed from his friendships with Degas and Manet and their own interest in incorporating theatrical subjects in their art. But the music halls encapsulated Sickert’s fascination with the specific raw vitality of London life, the bawdy energy of the performers and audience, and the glitter and unusual lighting of the theatres’ interiors. ​