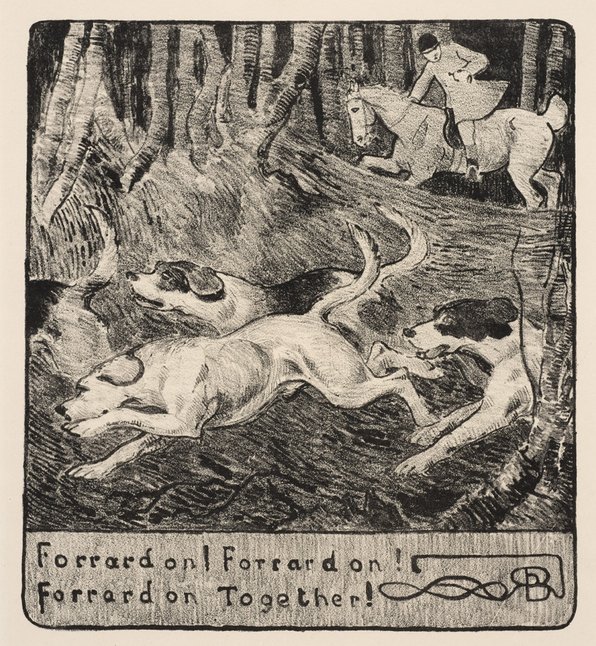 
​Robert Bevan 1865-1925
Forrard On! c.1898
Lithograph 13 x 10 1/2 inches (33 x 26.7 cm)
Across the base of the plate is the inscription 'Forrard On! Forrard On! | Forrard on Together!' with the monogram 'RPB' incorporated into a hunting crop. An edition of possibly 20 prints was printed on cream wove paper, watermarked Royal Parchment Wove with an accompanying royal coat-of-arms.

PROVENANCE:
By descent to the Artist's son, R.A. Bevan; by descent; Private Collection.

​LITERATURE:
Graham Dry, Robert Bevan 1865–1925 Catalogue Raisonné of the Lithographs and Other Prints, London 1968, no.15.
​
When Bevan arrived back in England by the end of 1894, he lived in an isolated farmhouse in Hawkridge on Exmoor. Here he kept a horse and hunted with
two local packs: the Dulverton, and the Devon and Somerset. Most of the surviving work from this period consists of drawings of hunting subjects, several of which were for lithographs.
Eleven lithographs were made from landscapes and hunting scenes of Exmoor, where Bevan worked until 1896. Some of these are known to have been drawn on the stone and printed after his marriage in December 1897.
ENQUIRE