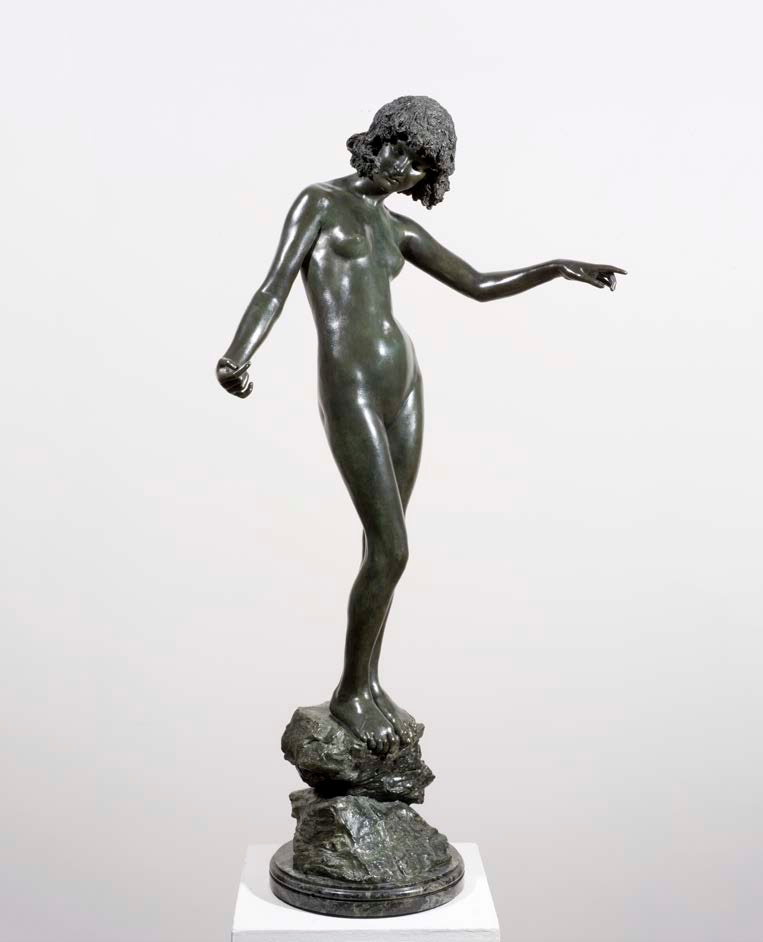 PROVENANCE:
Presented by the Artist, thence by descent.

This is an exceptionally rare cast of which only three were ever made.The two others are both in museums - the Tate and the National Galleries of Scotland.

Onslow Ford exhibited the first cast at the Royal Academy in 1886 when it was bought for the Nation by the Trustees of the Chantrey Bequest (and subsequently entered the Tate Collection).The present cast was presented to his friend and doctor Clinton Dent (1850-1912). Dent was a highly regarded surgeon but even more famous for his activities as a mountaineer and as President of The Alpine Club. He led by example, conquering summits including the 4,000 metre ascent of the Lenzpitze and the first ascent of the south-east ridge of the Zinalrothorn. Dent recorded many of his exploits in his book Above the Snowline (1885) and was the first to suggest Mount Everest could be climbed with the right expertise and equipment. Dent listed his interests in Who’s Who (1912) as ‘mountaineering and travel, any form of hard exercise, collecting art and photography.’
Onslow Ford was one of the most gifted of the generation of New Sculptors and this sculpture made his reputation.‘It made the fortunes of its creator’ confirmed the critic Marion Hepworth Dixon,‘for here in a seductively direct and simple realisation the sculptor both found and made his special gifts’ (‘Onslow Ford ARA’, The Magazine of Art, 1892, p.238). Ford was principally a great innovator, experimenting with naturalistic treatments of the body and, in other works, the use of exotic materials. In Folly he rejected all classical prototypes and conventions of ideal beauty and presented the embodiment of Folly as a girl poised precariously on the edge of a dangerous rock. Ford’s superb casting allowed enormous detail and created a deeply sensuous surface. It was made using the lost-wax process – casting bronze in a mould taken from a detailed wax model.The artist even pressed strands of animal hair into the wax to create the effect of her hair, which contrasts so satisfyingly with the smooth, undulating surface of her body. Such attention to surface detail even led critics to complain that the work was too life-like to be acceptable as sculpture, although this may have been led more by moral concerns.There is a similar contrast also between the torso and the rough rock upon which the figure stands.

In his 1901 history of the New Sculpture revival the contemporary critic M.H. Spielmann wrote rhapsodically of the bronze: